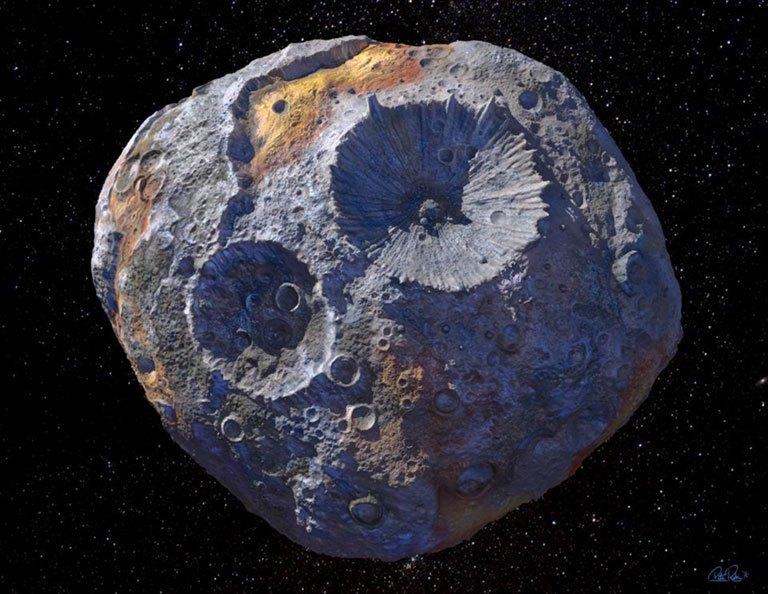 This week in our review:

The Sun: NASA lands on a metallic asteroid worth quadrillions

According to the Sun, the Space Agency NASA is planning to send a probe to Psyche 16, an asteroid with an estimated value of up to 8.500 quadrillion euro. Psyche 16 is two times wider than Wales and is made mostly of iron and nickel. It floats near the planet Jupiter – more than 370 million kilometers from Earth.

According to the newspaper the asteroid was found by an Italian Astronomer Annibale de Gasparis in the year 1852. For a long time people assumed that Psyche 16 was mostly made of gold, but new UV light scans show that the more likely composition is of iron and nickel. Still, the metals could be worth up to 8.500 quadrillion euros and – if brought to Earth – it could easily cause the global economy to crash.

NASA plans to send the probe in Summer 2022. Dr. Tracy Becker, leader of the study, believes that Psyche 16 is what remains of a protoplanet and hopes to research the formation of planets with samples gathered from the asteroid. NASA has no plans of making money off the asteroid. However, several companies already plan mining other asteroids closer to the Earth.

The Murenbeeld Group predicts that the gold price will rise during the next few quarters, according to the commentator Lawrence Williams. Murenbeeld, which is known for its realistic predictions, has lowered slightly from its previous estimate. The slight decline is due to how the growth of global money supply has moderated slightly faster than expected.

Murenbeeld presents three different predictions (see table in the original article): a bearish, a bullish and an intermediate, which they consider most likely. In this quarter’s prediction they have considered the possible reactions to the USA Presidential Election. For this quarter Murenbeeld predicts an average gold price of $1,965, which bulls to approx. $2 000 in Q1 2021 and continues to bull to approx. 2,335 in Q1 2022. Murenbeeld predicts that the U.S. dollar index will continue to fall slightly, which will also raise the gold price.

The group’s forecast isn’t as bullish as some commentators, but their predictions are usually closer to reality. Murenbeeld has always taken into account the close correlation between the movement in gold price and the inverse of the 10-year Treasury Inflation Protected Securities (TIPS) yield – which are expected to weaken. They point out that even when their prediction is more moderate when compared to other analysts, their prediction is still more bullish than what the current futures markets are predicting.

Central Banks are selling their gold reserves for the first time since 2010, according to Bloomberg. The producing nations are exploiting near-record prices to weather the blow from the coronavirus pandemic. As reported by the World Gold Council the net sales of gold in the third quarter totaled 12.1 tons of bullion, while a year ago the banks purchased 141.9 tons worth of gold. Driving the selling were the Central Banks of Turkey and Uzbekistan, who sold gold equal to 22.3 and 34.9 tons. In addition the Central Bank of Russia has reported their first sale in 13 years.

“Virtually all of the selling is from banks who buy from domestic sources taking advantage of the high gold price at a time when they are fiscally stretched.” said Louise Street, Head Analyst of the Council, who is not surprised of the banks decision to sell their gold reserves. Their purchases in the years before have underpinned the gold bullion, and Citigroup Inc. has predicted that central bank demand will rebound in 2021 back to the level of years 2018 and 2019.

Gold demand has reached near-record levels even if the overall bullion demand fell 19% – to its lowest since the year 2009. The decreased demand from the jewelry industry has been partially offset by the 21 % jump in demand from investors. The total supply of gold has decreased 3 % due to restrictions caused by Covid-19, but the loss has been somewhat softened by the recycling of consumer gold.

Gabelly Funds Senior Analyst Chris Mancini answers questions about why both gold and S&P 500 have reached record heights in 2020, the biggest since 1979. According to Mancini, the Fed is purchasing assets with new money. The heightened risk of inflation caused by this activity is encouraging investments in gold.

Mancini says that many gold mining companies have improved their production since the price crash of 2013. Thanks to this the companies generate more income and are able to pay larger dividends to their shareholders. Especially large companies who operate several mines are reliable targets for investing.

In the end Mancini claims it’s safer to invest in gold rather than, for example, silver or Bitcoin. He doesn’t trust Bitcoin or other “made from nothing” cryptocurrencies, and he believes that countries will bind their currency in gold, if inflation grows too large. The U.S. Presidential Election will affect the price of gold – especially the fiscal stimulus promised by democrats will raise it. He ends the interview by stating that if the dollar is bound to gold thanks to inflation, it’s price could rise up to 10.000 dollars.